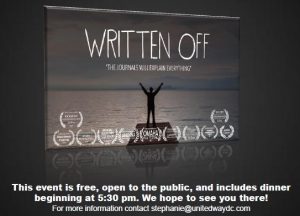 A free screening of Written Off, a Wisconsin based, award winning documentary about one man’s struggle with addiction will be held Tuesday, May 1, at Crossroads at Big Creek, followed immediately by a panel discussion surrounding topics of mental health, addiction, and stigma.  The Door County Alcohol and Other Drug Coalition has partnered  with  Door County Human Services, and the Door County Public Health Department’s Mental Health Focus Group for this community event.

This free event will include casual dinner, film screening, and panel discussion.  Food and beverages will be provided.  Casual dinner will begin at 5:30, with the film at6:00 pm, immediately followed by the panel discussion at 7:15 pm.

The film chronicles the life of Matthew Edwards, whose addiction to opioids began at age 15, after being prescribed pain medicine for a minor surgery.  His grippingly honest journal writing reveals the secrets he tried so hard to conceal throughout a decade long struggle to escape addiction.

In 2016, more Americans died from overdoses than died in the entire Vietnam War conflict.  And yet those new casualties are rarely considered victims of disease.  The documentary film Written Off is challenging conventional thinking about addiction. Stigmatizing victims of addiction has very real consequences – cutting them off from treatment, community, and funding.  By taking the viewer inside an individual’s fight against opioids, through personal journals, Written Off combats stigma and humanizes the victim.