Written Off – film and panel discussion 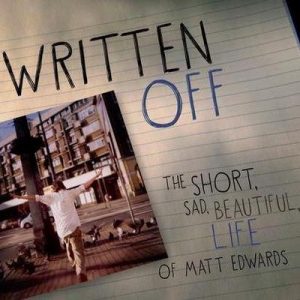 FREE – open to the public and includes a light dinner

Matt Edwards grew up in the Northwoods of Wisconsin, where the winters are long, they call the mosquito the state bird, and his hometown was so small that it didn’t have a single store. His first high came from pills prescribed by a doctor for a botched toe surgery.

For ten years he sweat out shift after shift in restaurant kitchens, working twice as many hours as anyone else so he could pay rent and feed his addiction.

Matt was driven by a desperate need to get a fix – more often to avoid withdrawal than to get “high” in a recreational sense.  To get what he needed he spun a web of fiction. He was a magnificent liar – smart, creative, persuasive – his lies fed his addiction as much as the actual drugs.

But for the last two years of his life, Matt told the truth to himself, in two spiral bound journals. He chronicled his daily drug use – sort of like the Bridget Jones of addiction but in cc’s, milligrams and dollars instead of pounds, drinks and cigarettes.   His journals also tell the story of his countless attempts to quit.

Everyday there is another front page tragedy detailing another spectacular fall from grace. What is missing is real understanding of the complicated personal experience within addiction.  How does a smart, loving, promising kid move from acting in the high school play to putting a needle in his arm?  WRITTEN OFF reveals that journey, in Matt’s own words. Behind the addiction, there is a person  – all at once lovable and despicable, funny and pathetic, young and old, destructive and aware of his failings.