Getting Kids Back to a Sleep Routine for School 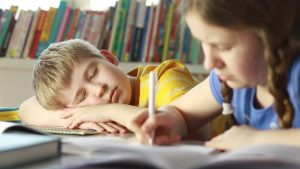 Earlier this week, I was talking with my soon to be 15-year-old daughter. It was the dreaded talk about bedtime during the school year and how good sleep habits were important. During the summer months, she was going to going bed around eleven, then watching “stuff” on her phone, falling asleep around midnight and waking up around 10 am. What always amazes me is how she tells me how tired she is, but fails to make the connection. Well, I made it for her. I asked him what she would miss if she didn’t have her phone and went to sleep around ten or even nine.  All she could answer was watching movies.

I asked her what she wanted most for her first year of high school. She immediately answered, “I want to get all A’s, do well in my sports, and have fun.” “All noble goals,” I said. “What is the biggest thing you can do to help reach those goals?” I asked.  She looked at me smiling, and said, “I don’t want to be so tired anymore. I’m going to change how I am with my phone at night.”  Now, as they say, the proof is in the pudding!

There is a great deal of important research regarding how sleep deficiency can impact brain development. Having a calm conversation about the latest science of sleep and brain development before even broaching the ideas of new sleep rules can be a great way of getting more on the same page.

It’s relatively recently that researchers have understood the incredible impact that sleep deprivation has on the developing brains of young people (Remember the brain is literally still forming until around age 24).

Dr.  Judy Owens, the director of sleep medicine at Boston Children’s Hospital and a professor of neurology at Harvard medical school is an expert when it comes to developing brains and sleep. Dr. Owen’s shared in a recent interview the fascinating glymphatic system of the brain.

Just like the body has the lymphatic systemic whose job it is to clear out the crud (scientific word, my choice), that shouldn’t be there, the brain has a glymphatic system whose job it is to clear out toxins like too many harmful proteins. One such example relates to Alzheimer’s disease, where abnormal proteins called amyloid plaques infiltrate the brain, and years of deficient sleep are correlated with an increased risk of this disease (Dr. Owens 2020).

The big idea is that scientists have found that the glymphatic system is primarily in action only when humans are asleep, deep sleep, in fact!

Studies show that over half of today’s teens are chronically sleep-deprived. What does it mean for their developing brains to have more toxic proteins circulating during the day? Researchers are still learning about the glymphatic system.

Dr. Adriana Galvan, a scientist of the adolescent brain, has done fascinating work looking at how sleep deprivation in teens impacts how the brain creates neuronal connections.

Building brain connections is part of the rewiring/pruning of the brain that happens during adolescence. In one study, Dr. Galvan had 14 to 18-year-olds wear special watches for two weeks that measured their sleep activity.  They used functional MRIs and special brain mapping analysis to see how the brain formed connections in different regions that included the prefrontal cortex, where our higher level thinking processes occur. What Dr. Galvan found is frightening. Those teens who experienced more disrupted sleep than others were significantly more likely to show abnormal brain connection patterns.

There are many reasons that kids and teens can get less than the recommended sleep when school starts. This year will certainly be a challenge in that traditional after school activities may not be keeping kids out late, but as I have found with my own children, ther things will creep in and tug at their sleep. Things like increased worry, stress, sadness and uncertainty.

however, as I shared earlier, one of the biggest culprits of sleep disruption is having tech devices in bedrooms at night. There is data that reports 36% of teens self-report that they wake up at least once a night and check their phone. Other studies have shown that simply having the phone in the bedroom at night, even if turned off, and even if the person says they do not check it, negatively impacts sleep duration.

Parents need more help then they get to make healthy sleep happen. Trying to pry their technology away is difficult at best. Tech companies have no incentive to get our kids off devices at night. Reed Hastings, the chairman of Netflix, said in 2017 that sleep is their biggest competitor. The proliferation of access to constant entertainment will only make this challenge worse.

The shift from summer to school this year is different in almost every way, but ensuring our kids get enough sleep so they can be ready for a productive day of school work is crucial.

Here are some things to consider for back to school and sleep: