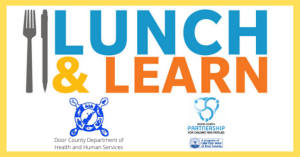 These Trauma Informed Care (TIC) training sessions are the 4th Monday, every other month, from 12pm-1pm in the Peninsula Room @ Government Center – 421 Nebraska St., Sturgeon Bay, WI
Due to COVID-19 Lunch & Learn sessions will be virtual until further notice.

Join our Lunch & Learn distribution list to be notified of upcoming sessions.

All kids struggle from time to time. How they communicate that they are struggling has a tremendous impact on how adults respond to them. For those that communicate their struggles by “acting out”, the punitive response they get from adults may cause far more harm than good. This documentary explores what children’s behaviors are really telling us, along with which approaches work and which do not to help children cope and be successful in school and life. While some of the film describes a specific evidence-based approach developed by Dr. Ross Greene called Collaborative & Proactive Solutions, we think you will see some parallels to other approaches already used in our schools and community. We are not promoting this specific intervention. Rather, we will explore various ways that caregivers can identify the problems that are causing children to act out and solve those problems collaboratively and proactively. 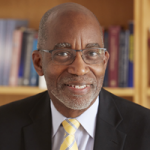 June 2021: The Power of Addiction and the Addiction to Power

Born in Budapest, Hungary in 1944, Gabor Maté is a Jewish survivor of the Holocaust. His maternal grandparents were killed in Auschwitz when he was five months old. His aunt disappeared during the war, and his father endured forced labor at the hands of the Nazis. He emigrated to Canada with his family in 1956. He was a student radical during the Vietnam War era in the late 1960s and graduated with a B.A. from the University of British Columbia in Vancouver, Canada. After working as a high school English and literature teacher for several years, he returned to the University of British Columbia to obtain his M.D. in general family practice in 1977. He has worked in private practice and in harm reduction clinics in Vancouver. As a physician, many of his patients suffered from a combination of mental illness, drug addiction, and HIV. He worked in harm reduction clinics in Vancouver’s Downtown Eastside. He is widely recognized as a specialist in terminal illnesses, chemical dependents, and HIV positive patients. Dr. Maté is the author of many books, including In the Realm of the Hungry Ghosts. He is a renowned for his work on the topic of addiction and its connection to trauma. At this Lunch and Learn, we will view a TEDX talk by Dr. Mate’ on “The Power of Addiction and the Addiction to Power,” followed by group discussion.

Essential Oil enthusiasts, Melanie Bauer and Kathy Schultz presented Part One of a two-part series about Essential Oils. They shared information and experiences for incorporating essential oils into a self-care and wellness practice as well as how they have included essential oils into their professional practice. “Essential Oils 101” provides a brief overview: What are essential oils? Learn the history and origins of essential oils. Does quality matter? The proper use and safety of oils to support a healthy lifestyle. Explore the connection between aroma, the brain and emotions. 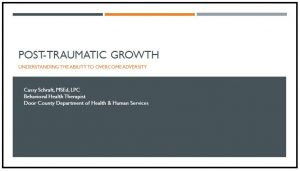 We will be taking a look at Post-Traumatic Growth and understanding why individuals respond to trauma and adversity the way that they do. We will try to answer the question of what it is that makes some people more resilient in the face of adversity while others seem to succumb to stress, and address what we can do to foster resiliency in ourselves and the consumers we work with.
Presenter: Cassy Schraft MSed, LPC
Behavioral Health Therapist – Door County Dept of Health and Human Services 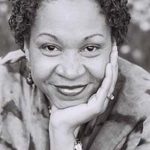 Join us as we explore the groundbreaking theoretical work of a social worker, researcher, author and speaker Dr. Joy DeGruy.
Dr. DeGruy’s book Post Traumatic Slave Syndrome: America’s Legacy of Enduring Injury and Healing (PTSS), goes beyond traditional ACEs research. She explores the multi-generational trauma experienced by African Americans that lead to undiagnosed and untreated post-traumatic stress disorder (PTSD) in descendants of African slaves. Her work is a call to action for all of us to work toward social justice and an end to institutional racism. We will watch a podcast interview of Dr. DeGruy followed by group discussion.

If you are interested, here is a link to her book:  Dr. DeGruy’s book Post Traumatic Slave Syndrome: America’s Legacy of Enduring Injury and Healing (PTSS)

Parents Supporting Parents is all about empowering parents and making sure parent voice, and perspective, is heard and taken into consideration. We are very excited to provide information about this program and are also offering a way for those who are interested, to get involved.

Generational Trauma presented by Cassy Schraft, Behavioral Therapist – Door County Dept. of Health and Human Services….
“We often see in the individuals we work with, that the trauma they experienced did not start with them.  Trauma has the potential to get passed down from one generation to the next and individuals may end up responding to the trauma experienced by their ancestors.  This Lunch and Learn presentation on Generational Trauma will look at how trauma gets transferred between generations through the lens of both nature and nurture, as well as practical strategies for how to address this unique type of trauma in the individuals and families we serve.” ~ Cassy Schraft